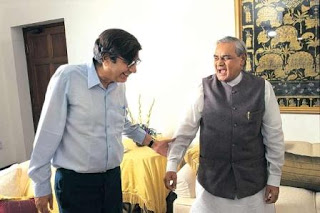 Vinod Mehta’s memoirs, Lucknow Boy, could not have been published in a better time. We don’t have to agree with Press Council of India’s Chairman Markandey Katju’s prescription entirely to know what is wrong with Indian media today. Media criticism is the flavor of the season. It is written all over the wall.

With the curiosity of knowing the inside story of media industry I finished this unputdownable autobiography very fast. I always wonder ‘how one can write autobiography!’ For most of us tend to ‘experiment with truth’ in our life, rather than write the ‘truth’.

In Mr Mehta’s own words these memoirs are, ‘…the first rough draft of my history.’ He dissects his life like a seasoned surgeon.

Fathering a daughter, when he was in London in 60s, and not having courage to own her up, he has the temerity to call himself a ‘bastard’. And only a flamboyant editor like Mehta has courage to name his dog ‘the Editor’!

Journalists have the privilege to see and report the events of a nation from close quarters. ‘Lucknow Boy’ doesn’t disappoint us, telling tales of our times and power and mighty with a pinch of salt and pepper.

We, who grew up in liberalized India, didn’t see Mr Mehta’s editorial skills when we was at the helm of Sunday Observer, the Indian Post and other magazines. On a personal note, I knew Vinod Metha, the editor, in 1995, the year I came to Delhi. I vividly remember an October evening we were taking a stroll in Mukherjee Nagar in Delhi, a student hub for Bihari migrants, when I chanced upon a new news magazine ‘Outlook.’

In my long student years, I have subscribed to many other current affairs magazines, but, I rarely missed to flip through ‘Outlook’. In between, I was fascinated by ‘Tehelka’ and ‘Frontline’, but ‘Outlook’ kept my interest intact.

Before he joined as editor of Outlook, Mr Mehta was famous editor of ‘infamous’ ‘Debonair’ in mid 70s.

‘Although I had become a full-fledged editor, I failed to penetrate Bombay’s esoteric social scene’, he bemoans. 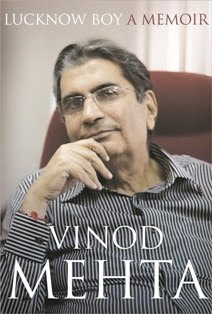 Further recounting his Debonair days he writes, “Debonair’s name and fame grew by the year but it was unable to shed its smutty aura.’

Mehta quotes former Prime Minister Atal Bihari Vajypee complimenting him, ‘Your magazine is very good,’ but I have to keep it under the pillow.’

All the great editors are product of their times and the confidence they enjoy of their proprietors. This is amply evident from the experiences of Mr Mehta. At the Debonair, he enjoyed the confidence of the owner of the magazine Susheel Somani, and the ditto for ‘The Sunday Observer’. But his stint at the ‘Indian Post’, launched in 1987, was short lived. Mr Mehta notes, ‘The paper was looking good, the reader response was good but the management was terrible.’ His relationship with owner of the Indian Post, Vijaypat Singhania soured. And inevitable happened; he was fired in 1989!

Soon after that Mr Mehta launched ‘Independent’, the same year, under the proprietorship of Indian Media’s ‘golden boy’ Samir Jain. Alas, it was just 29 days wonder and Mr Mehta had to go from Times network. It is little baffling and a riddle to decode that why he is still all praise for Sameer jain, but has no qualms in blaming the ‘denigration and decline of Editor as an institution’ on Dileep Padgaonkar.

However, in between these lines, we read how in the licence quota raj, in the 1980s, the news stories were killed, business interests served and editors were left unguarded at the mercy of ‘white elephants’ like Satish Sharma and Sharad pawar.

With the uproars of Mandal and kamandal in the air, a disenchanted Mr Mehta came to Delhi, in 1991, with a new edition of the ‘Pioneer’ under the proprietorship of maverick L M Thapar. After few months of bonhomie he notes, ‘my only worry was the proprietor.’

Defying his own records of ‘being most sacked editor in India’, Mr. Mehta has been with Outlook magazine for the long 15 years, since its inception. Needless to say credit goes to the proprietor of the Outlook, Rajan Raheja.

Mr Mehta writes, “When I go and meet the supreme editor-in-chief in the sky, I will tell him ‘Lord, I committed many small sins but on the big issues I remained entirely professional.’

And he had to pay for his ‘professionalism’ many times in his career. He has written at length how NDA government targeted the publication and its proprietor.

Last year, Outlook was in the news when it published the transcripts of Niira Radia tapes. NDTV’s Managing Editor Barkha Dutta was also there in that tapes ‘stringing along a source’.

Reality bites and NDTV has banned Mr Mehta from their channel!

(Published on the Hoot under 'Vintage Vinod' on 3 December 2011)