When Dera Sacha Sauda chief Gurmeet Ram Rahim was convicted for rape by a court in Panchkula on Friday, the violence that followed received wall-to-wall media coverage. The event dominated the newspaper headlines the next morning. But the difference in the choice of words in the reports in the Hindi press and the slant they took offered an insight into the market interests prevalent in the newspaper industry in that language.
Some Hindi papers seemed almost reverential towards the rape convict. Strikingly, the biggest Hindi dailies published in the National Capital Region refrained from using the word “balatkar”, or rape, in their headlines. The Nav Bharat Times not only failed to use the word “rape” in its headline, the word was also conspicuously absent from the front page. This was in contrast to the headlines in English-language newspapers such as the Indian Express and The Hindu.
The tone of the Hindi newspapers was surprising, considering that it was a Hindi journalist, Ram Chander Chhatrapati, who first exposed the rapes and sexual harassment faced by Ram Rahim’s female devotees by publishing an anonymous letter about this in 2002 in his evening paper, Poora Sach. He was shot dead later that year, allegedly in retaliation for this act. Ram Rahim is an accused in the murder case and hearing in this case is in the final stage.
Though Hindi newspapers have been giving space to news and analysis related to women since the 1980s, sparking a new discourse around women’s rights, there is still a patriarchal bias in reporting rape. In my research, I have found that the choice of language in Hindi newspapers more often than not seems to almost celebrate rape by using phrases like “pushti ho gayi” (rape is confirmed),” “balatkar ke record toot gaye (new record in the rape case)“ and using words like “pidita” for victim and “dabang” for the culprit. 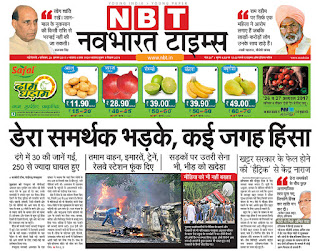 The coverage of the Rahim Rahim case is a reflection of the impulse evident in the Hindi newspaper industry over the past two decades to deliver “khush khabar” or good news. Newspapers try to avoid publishing reports that could disturb or offend their readers even if the news has to do with heinous crimes like rape.
In the last two decades, technology and economic change have transformed the Hindi newspaper business, with a steady increase in literacy and expanding purchasing power, accompanied by volatile political situation in the Hindi belt. Their influence among ruling class has also increased. However, the internal structures of Hindi newspapers haven’t changed much. There is still only a handful of women journalists in influential positions, which is reflected in the way Hindi newspapers set their agendas and cover the news.