Who's News: Ideology and practice of the Hindi media 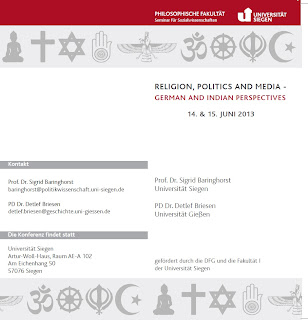 Religion, Politics and Media: German and Indian Perspectives
University of Siegen, Germany (14-15th June 2013)
The Representation of Religious Diversity in Hindi Language Newspapers in India
Dr Arvind Kumar (Arvind Das)
India is a multiethnic, multireligious, multilingual society. Indian constitution describes it as a ‘sovereign socialist secular democratic republic’. Still religion, caste and linguistic identities play a major role in defining Indian nation and its democratic politics. In the last two decades, Indian politics hovered around the twin identities of caste and religion, accompanied by the exponential growth in the language media.
While in Europe the obituary of newspapers is being written every now and then, media industry, particularly language newspaper industry in India is seeing a phenomenal growth with the advent of new technologies which came with globalization and the increase in literacy and expanding market. Among all the vernacular languages, Hindi being an official language and lingua franca has wider reach in the country. According to the Audit Bureau of Circulations (ABC) the average certified copies of Hindi language dallies in the period of July-December 2012, was over 15 million, while for English dallies it was over 9 million, for Malayalam it was over 4 million and for Marathi dallies it was over 5.4 million. In this paper I will try to map the role of Hindi newspapers in representing religious diversity in India.
Who's News: Hindi newspapers in the Globalizing India
SAA, University of Heidelberg (Lecture, June 18th 2013)

In the last decade of 20th century Indian economy embraced the process of liberalization (1991), heralding the contemporary phase of Globalization.  It changed the nature of Indian state and made profound impact on the society. In the same period language media, particularly, Hindi language newspapers, flourished accompanying the changes in the literacy and the political discourse in the Hindi heartland. The relationship between globalization and Hindi newspapers is quite interesting. Hindi newspapers got an identity of its own, emerged as a market leader, expanded its reach and thus redefined the public spheres. Newspapers internalized the changes brought by the globalization changing the language, content and presentation of the news. Looking at the newspapers we see the politics is no longer given prominence, instead economic, sports and entertainment news hog the headlines. Although the Dalits and women are still conspicuous by their absence in the newsrooms, there emerged a new discourse relating to them on the pages of newspapers. In this lecture I will focus on the impact of globalization on Hindi newspapers and its relationship with the Indian society.

Ideology and practice of the Hindi media
Asia and Africa Institute, University of Hamburg, Germany (lecture, 19th June 2013)
Unprecedented changes have been taking place in the last two decades in the realm of global media. In Europe, the obituary of newspapers is being written every now and then but language newspaper and television industry in India has seen a phenomenal growth with the advent of new technologies, which came with liberalization and globalization of the Indian economy in the last decade of 20th century, accompanied by the increase in literacy and expanding market.

Hindi media has emerged as a medium of political power and discourse. It’s no longer a ‘poor cousin’ of English. It has gained a new confidence vis-à-vis its English counterpart. Now Hindi newspapers are getting published from many regional centres and almost every newspaper has its internet edition, and thus redefining and reinventing the public sphere. It has become global in reach while catering to the local tastes and interests.

Since the publication of first journal, Oodunta Martand (The Rising Sun) in 1826, Hindi press has traveled a long way. In the pre-independence era Hindi press voiced its nationalist concerns and practiced it with missionary zeal but post-independence it emerged as a profession and now it is a huge industry. Hindi media’s ideology is governed by the market forces and very definition of news has changed. Relationship between production departments and editorial board is fast changing. The role of editors have been relegated and ‘brand managers’ are taking control of the newspapers.

In this lecture, I will try to map the contours of changes particularly in terms of news production, content, language, ownership, training of journalists, role of editors and the shift in ideology that took place in Hindi media in the globalizing India in the period of 1991-2012.
Posted by Arvind Das at 1:10 PM