Maithili Cinema: In search of a home 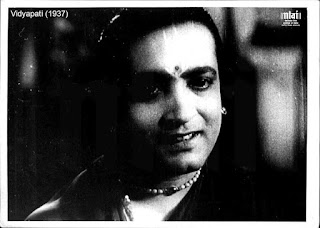 Pahari Sanyal in Vidyapati (1937). Courtesy National Film Archive of India.
The New Theatres classic Vidyapati, directed by Devaki Bose and exploring the life and times of the fourteenth-century court poet Vidyapati, is remembered even today for its sonorous songs and melodious music. Surprisingly, the song lyrics draw no inspiration from the renowned poet’s words. Nor is the film in Maithili, the language in which he communicated. Rather, the 1937 film is in Hindi and Bengali.

Maithili cinema had to wait until the 1960s to begin its journey in Indian cinema. Kanyadan from 1965 is credited as the first movie in Maithili. Phani Mazumdar’s film is based on Harimohan Jha’s novel of the same name. The theme of a mismatched married couple is depicted through a difference in language – the characters speak Maithili and Hindi, respectively. Noted Hindi writer Phanishwar Nath “Renu” wrote the dialogue for Kanyadan.

Naihar Bhel Mor Sasur, directed by C Parmanand, might have been released earlier than Kanyadan had it not faced production obstacles. Ultimately released in the mid-1980s under the title Mamta Gabay Geet, the movie is still remembered for its dialogue and songs, by such leading playback singers as Geeta Dutt, Mahendra Kapoor and Suman Kalyanpur.

Maithili was included in the Eighth Schedule of the Indian Constitution in 2004. The Mithila region, which encompasses parts of present-day Bihar and Nepal, is known for its language, literature and culture. And yet, it is Bhojpuri, the language spoken in Uttar Pradesh, Bihar and Jharkhand, that has produced a more vibrant and sustainable cinema. Any discussion of the cinema of Bihar begins and ends with Bhojpuri films.

Production on the first Bhojpuri film Ganga Maiya Tohe Piyari Chadhaibo began at around the same time as Mamta Gabay Geet (which was delayed by at least two decades). Kedarnath Chaudhary, one of the producers of Mamta Gabay Geet, said, “Bhojpuri films reached their zenith while Maithili remains at the bottom.”

The 1966 Hindi-language film Teesri Kasam, directed by Basu Bhattacharya and produced by the lyricist Shailendra, was based on the short story Mare Gaye Gulfam by Phanishwar Nath ‘Renu’. Could Teesri Kasam have been made in Maithili? The movie, starring Waheeda Rehman and Raj Kapoor, depicts Mithila’s culture and has scenes containing Maithili dialogue. Kedarnath Chaudhary said, “If Teesri Kasam had been made in Maithili, the trajectory of Maithili films would have been very different.”

A strong culture ofmovie-watching existed in Bihar right from the earliest years of cinema. Patna still has Elphinstone Theatre, which came up in 1919 and started off by screening silent films. And yet, not only have there been relatively fewer films in the local languages, but also the existing productions are poorly preserved. Prints of the first Maithili film Kanyadan are unavailable today – even the National Film Archive of India in Pune doesn’t have a copy.

Regional cinema has managed to conquer new territories in the past two decades. Films made in Marathi, Punjabi and Malayalam films have been popular beyond their language markets. There is a glimmer of hope for Maithili films, represented by Nitin Chandra’s Mithila Makhan (2015), Roopak Sharar’s Premak Basat (2018) and Achal Mishra’s Gamak Ghar (2019).

Mithila Makhan is the only film to have won a National Award for Best Film in the Maithili language. Gamak Ghar has received widespread critical acclaim and has travelled to several film festivals. Yet, distributors have been largely unenthusiastic about backing Maithili films. Director Nitin Chandra said, “Distributors do not even know that there is a language called Maithili in which films are made.” After streaming services rejected Mithila Makhan, he released the film this year on his own online platform, Bejod.in. Clearly, the story hasn’t changed too much since Mamta Gabay Geet. It appears that all these years later, Maithili cinema is wandering in search of a home.

(All these years later, Maithili cinema is still in search of a home)