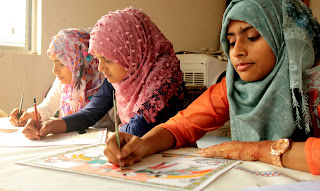 Armed with fresh education and networks, young artists from Ranti are reviving the glory of Mithila paintings.

In 1949, when British art aficionado WG Archer wrote in the prestigious magazine Marg on the beauty and distinctiveness of Mithila painting, he did not refer to it as folk art. Still, in the last fifty years, Mithila painting has always been labelled a folk/ritual art and discussed along caste lines.

It is true that since time immemorial, across the Darbhanga-Madhubani region of Bihar, paintings adorned the walls (Kohabar) and floors (Aripan). However, in the last three decades, the Ranti and Jitwarpur villages of the Madhubani district have emerged as prominent hubs of Mithila painting, which is why the art form got the name ‘Madhubani painting’. So far, seven Mithila artists had been awarded the Padma Shri, of whom, barring Ganga Devi, six are from these two villages.

In 1991, eminent Mithila painter, late Mahasundari Devi from Ranti, had depicted the Ram Katha in a traditional art form for the Ravindra Bhawan, Bhopal, in a truly stunning way. In 2002, his nephew, the well-known artist Santosh Kumar Das, an alumnus of Maharaja Sayajirao University, Baroda, made a series of paintings depicting in the Mithila style the Gujarat riots, giving a voice to a contemporary reality of India. Santosh Kumar Das had learnt this traditional art from his aunt as a child. Still, his political consciousness took Mithila art into quite a unique territory, which echoes and gets shared among young artists of his village.

In the last two decades, young artists, many trained under Das, started experimenting with traditional and contemporary subjects, using the old Bharni or filling and Kachni or line techniques. They are setting the century-old art form within a new idiom.

Like Das, young artist Avinash Karn, too, was trained in the fine arts at Banaras Hindu University. With the help of Artreach India, a non-government organisation, he is currently engaged in a community art project in Ranti. He is training Muslim girls from the nearby villages in Mahbubani art. Due to the lockdown announced during the Covid-19 pandemic last year, he relocated from Banaras to his village. It is the first time in the history of Mithila painting that Muslim women are practising this art form and bringing subjects such as communal harmony (Sarwari Begum’s Eid Mubarak), dowry in the Muslim communities, women’s empowerment to the fore. Karn says, “Muslim girls have always nurtured a desire to paint but never got an avenue to do so. I wish to incorporate my training into Mithila art and bring young artists from deprived communities together.”

Earlier, the legendary artistGanga Devi, who passed away in 1991 and was from Rashidpur village, had experimented with modern themes. Both Das and Karn acknowledge this contribution; Karn considers her a pioneer who established this folk art among contemporary artists. She introduced autobiographical elements into the art, besides painting the famous Kohabar of the Arts and Crafts Museum in Delhi, which was unfortunately demolished in the name of modernisation in 2015. 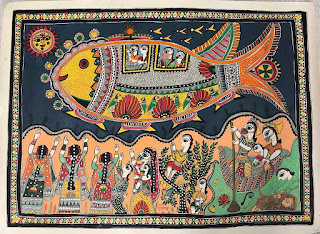 Recently, I was in Ranti, where I saw many paintings of young college-going students Sarwari Begum, Saleha Sheikh and Sajiya Bushra in Avinash Karn’s modest studio. Sajiya and Saleha are sisters and first-generation artists. When asked what they like about this art form, Sajiya says, “Through this art, I depict the story of our life and society. We see the differential treatments given out to girls in our home which I bring out in my paintings.”

Sarwari Begum likes the Kachni style of Mithila painting. She says, “Ever since I was in fifth standard, I wished to paint in the Mithila style but never got a chance. Now that Avinash sir has given me an opportunity to learn it, I wish to take it further in my life.” Technically, their paintings might not be on par with those of trained artists, yet it shows the eagerness of a new generation to experiment and innovate. Besides, it is helping bridge the communal divide in society.

Like her contemporaries Ganga Devi and Sita Devi, Mahasundari Devi was known for traditional motifs (Kohabar, Dasavtar, Aripan, Astdal) and mythical themes revolving around Ram, Sita, and Krishna. She was also a remarkable guru as Dulari Devi, this year’s Padma Shri recipient for her contributions to Mithila (Madhubani) paintings, recounted to me when I met her in 2011 in her village. That was the year Mahasundari Devi was awarded the Padma Shri. She told me: “Shuru shuru mein main painting beech mein hi chhod kar bhag jati thi, leykin Mahasundari Devi hath pakad kar mujhey sikhati rahi—In the beginning, I would interrupt my painting work, but Mahasundari Devi held my hand and taught me to carry on to the end.” She is the third Padma Shri recipient from this village after Mahasundari Devi and Godawari Dutta (2019). However, her story is quite different from both the master artists, which is reflected in her brilliantly coloured paintings.

Fifty-three-year-old Dulari Devi belongs to the Mallah community and did not get any formal education. She was working in Mahasundari Devi’s household in Ranti village near Madhubani when she encountered Mithila painting. She has narrated how she became an artist in her book, “Following my Paint Brush”, published by Tara Books. “One day, I went to work at a new house as a cleaning woman. It turned out that the woman I worked for was not an ordinary person—she was an artist! I saw her paintings, and was so delighted that I forgot my own work…The next day, when I came to work, my employer was taking a painting class.... I found the courage to ask her.... could I learn how to paint too? She said yes!”

As is well-known, the Madhubani/Mithila art form was largely a preserve of women from the elite Brahmin and Karn Kayastha communities. Women from the margins of society, particularly from the Dusadh community, introduced a new style named Godana or tattoo in the seventies. Later, Chano Devi, Shanti Devi and others began painting folklores from the life of Raja Shalhes.

In the 1960s, Madhubani painting came from wall paintings to paper, making them easy to buy and sell. Thanks to ace artists Jagdamba Devi, Sita Devi, Ganga Devi, Mahasundari Devi, Godawari Dutta, and Boua Devi, very soon, it caught the attention of art connoisseurs across the world. However, in the nineties, the art form started to lose its distinctive appeal with the growth of the market, as became quite apparent from some of the works available in places like Dilli Haat.

Armed with new education and networks, young artists from Ranti are trying to innovate and revive the glory of this magnificent art form. A few years back, Shantanu Das brought the famous Hindi and Maithili poet Nagarjun’s “Akaal Aur Uskey Baad” (Drought and After) alive on a large canvas. Although the 14th-century Maithili poet Vidyapati writes about Kohabar (nuptial chamber) in his poems, literary subjects were seldom considered for these paintings. Then, there can be no disagreement with Shantanu when he says: “It is no longer a ritual art”.