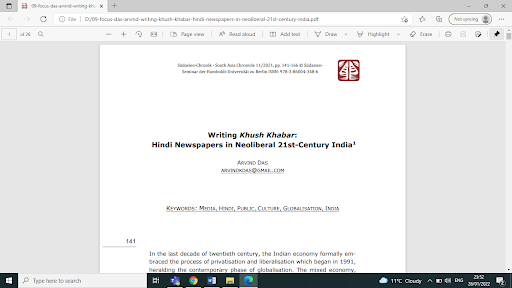 In the last decade of 20th century, the Indian economy formally embraced the process of privatisation and liberalisation which began in 1991, heralding the contemporary phase of globalisation. The mixed economy, which was based on self-reliance and import substitution in the planning era, was opened to foreign investment, finance and trade. These economic reforms have changed the nature of capitalism and the nation-state and had a profound impact on Indian society and culture. Technology and economic change, which came with globalisation, have also transformed the media business, accompanied by an increase in literacy, expanding purchasing power and a volatile political situation in the Hindi belt (Bhaduri & Nayar 1996; Jeffrey 2000; Ninan 2007; Das 2013). Amid these changes, the media has emerged as an important site of ideological production and public discourse.

In contrast to the US, UK and Germany, where circulation figures for print publications are on the decline and the 21st century slogan is 'Internet first,' the Indian print media industry has been growing steadily. According to the Audit Bureau of Circulations (ABC) report for 2017, despite competition from television, radio and the digital medium, the average number of copies of print media publications in India went up by 23.7 million between 2006 and 2016. Most importantly, Indian languages have propelled this growth, in particular the Hindi press, which was the fastest to grow, at the CAGR (Compound Annual Growth Rate) of 8.76 per cent, during the period 2006-2016, while the English-language press grew during the same period by just 2.8 per cent.[i]

Against this backdrop, the relationship between the neoliberal phase of globalisation and Hindi newspapers is intriguing and open to different interpretations. Hindi newspapers have an identity of their own and have emerged as market leaders, leaving behind the dominance of the 'elite' and 'national' English newspapers. Using global technologies such as computers, the Internet, fax, cell phones, etc., the Hindi press has expanded its reach into the small towns and mofussil locations away from metropolitan centers, thus reinventing and in the process transforming the existing post-colonial public sphere.[ii]

In the same decade, during the 1990s, there were significant churnings in the socio-political cauldron of north India, which led to the emergence of Hindu nationalism based on Hindutva ideology and political participation of lower castes/class based on the ideology of social justice.[iii] With the interplay of these twin political projects, which came to be known in the popular media as Mandir and Mandal respectively, the influence of Hindi newspapers among the ruling elite of Indian democracy has also increased. At the same time, the Hindi press internalised the changes induced by the burgeoning market and consumerist ethos of corporate capitalism in the liberalised economy, changing the culture of news production, dissemination and 'definition.' The question, however, is what have been the characteristics of this process of change? What were the paths it followed? In other words, what have been the prominent journalistic practices and features of the Hindi press in this globalizing, neo-liberal nation-state? Did it lead to the vernacularisation of Indian democracy or to the refeudalisation of the Hindi public sphere?[iv] In this paper, I map and analyse the contours of these developments in the contemporary Hindi public sphere in the 21st century.

For full paper see the link below

[ii]  In this paper, I use the terms Hindi press and newspapers interchangeably.

[iv] Lucia Michelutti. 2008. The vernacularisation of democracy. New Delhi: Routledgestudy is stufya Bonearishna Sen rtisements from a sakti hai)is chaning). 0) in, p. 204. In her study of the north Indian city of Mathura, in particular the social and cultural practices of Yadavs/Ahirs, Micheluti mentions the process of vernacularisation of Indian democracy. Although she does not dwell upon the role of the Hindi press in this process, she notes in passing that, 'Local newspapers advertised the regional meeting and the MYS (Mathura Yadav Sammelan) organised three informal gatherings in Ahir Para to organise the trip to Kanpur. These meetings were reported in the local newspapers Amar Ujala, Aj and Dainik Jagran. This is an example of how vernacular media are heavily used by the local Yadav caste associations and how important printing material is in placing the Yadav community in the public arena.' Furthermore, she also defines the vernacularisation of democratic politics as 'The process through which ideas and practices of democracy become embedded in particular cultural and social practices, and in turn become entrenched in the consciousness of ordinary people ', p. 217. Taberez Ahmed Neyazi. 2011. Politics after vernacularisation: Hindi media and Indian democracy. Economic and Political Weekly, 5 March, pp. 75-82. Neyazi has further elaborated upon 'vernacularisation and the role of Hindi press in the deepening of Indian democracy.' As he points out, 'The expansion of Hindi newspapers into the hinterland, though directly motivated by profit generation, also helped in creating a space for marginalised groups to raise their grievances in the public arena. As English newspapers have largely been concentrated in urban areas, and television is mostly national and regional, the local space, which remained unrepresented, was appropriated by Hindi newspapers.' See also Ursula Rao. 2010. News as culture. New Delhi: Foundation Books, pp. 84f.: 'Through local pages and by supporting the making of news networks, Indian newspapers offer institutionalised "social capital" for democratic circulation. It is the door to a "parallel" universe of connections and influences. The desire to become connected, and the reality of having to work through relations, turns newspapers into a local organ. Newspapers achieve what Berger (2000) has called the democratic participatory role.' Jürgen Habermas. 1989. The structural transformation of the public sphere. Cambridge: Polity Press, p. 206. Habermas writes about the refeudalisation that occurs as the commercial interests of powerful corporations dominate the media market and usurp the rational-critical function of the public sphere. He writes about the transformation of public sphere: 'Before the expanded public sphere the transactions themselves are stylised into a show. Publicity loses its critical function in favor of a staged display; even arguments are transmuted into symbols to which again one can not respond by arguing but only by identifying with them.' I am using 'refeudalisation', in the Indian context, to mean manipulation of the mass media through 'paid news' and 'Khush khabar (good news)' and thus subverting the 'rational-critical' space in the participatory democracy. Here a reader is perceived as a consumer of the (mass) product rather than a (public) citizen.