Jahnu Barua: ‘It has been quite a struggle, but a good struggle’ 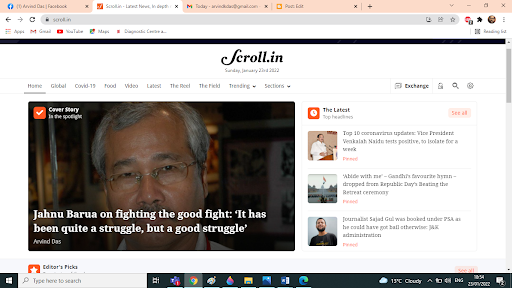 Eminent Assamese director and 12-time National Film Award winner Jahnu Barua is known for his socially conscious cinema. Over the last 40 years, Barua has made 13 films in Assamese and one in Hindi. His most well-regarded movies include Halodhia Choraye Baodhan Khai (The Catastrophe) and Hkhagoroloi Bohu Door (It’s a Long Way to the Sea). In an interview, the 69-year-old director spoke about the challenges facing independent cinema, his upcoming Hindi movie, and the influence of his mother on his films. Here are edited excerpts.

Assamese directors have been in the news of late, such as Aimee Baruah’s ‘Semkhor’ (in the Dimasa language) and Reema Das’s ‘Village Rockstars’ and ‘Bulbul Can Sing’. How do you see contemporary cinema from the North-East?
The kind of attention the local film industry needs particularly from the government is not there. As a result, filmmakers are more into commercial cinema, and it’s affecting the film industry. We see influences from Bollywood. But there is a lot of good talent. If they get support, they will definitely come up with good stuff.

At the same time, we need to understand that the entire North-East as a market for local films is very small. Since cinema depends on the market, it suffers a lot. That’s why government and public support are needed.

Despite an undeveloped market you have been making Assamese movies for the last four decades.
Like any filmmaker, it has been quite a struggle, but a good struggle. I don’t make commercial films. The kind of films I make are difficult not only in Assam but anywhere in India. I like to make films on certain social issues that appeal to me, and I feel that as a filmmaker, I should concentrate on those subjects.

‘Firingoti’, which you directed, and Satyajit Ray’s ‘Agantuk’ won the National Award for Best Film in the same year in 1992. How do you remember your interaction with Ray?
I met him twice. He had come to see my film in Kolkata once and then at a film gathering, Chidanand Dasgupta introduced me to him. He had said a lot of good things about my films. I still remember that I could not sleep the whole night.

What did he say?
He said, there is so much promise in you and I am so happy to see that. It was a great thing for me to hear. It was a dream come true.

Directors trained at the Film and Television Institute, such as Adoor Gopalakrishnan, Girish Kasaravalli and yourself, have transformed regional cinema. How do you see your journey?
There is a very strong passion among filmmakers in regional languages, starting with Adoor Gopalakrishnan, to make different kinds of meaningful films that we can call Indian and India can be proud of. But this parallel cinema could not take off properly. No system has properly supported it, including the government. Unfortunately, politicians and bureaucrats are not aware of this medium. Their understanding of cinema is very poor.

I would not say that the movement has died down, it’s still there. Young filmmakers with whom I interact have a very good mindset. Filmmakers from Assam, Bengal, Kerala, Manipur, Meghalaya and Maharashtra are coming up with very good ideas. It will definitely make a difference tomorrow.

Since your first film, ‘Aparoopa’, you have had strong female protagonists. Aparoopa leaves her husband to be with her former lover. When I saw Bhaskar Hazarika’s ‘Aamis’, ‘Aparoopa’ came to mind.
It’s definitely from the kind of family background we have had. In Assamese society, unlike in many other states in India, there is equality when we talk about women. Ever since I was a child, I have been comparing the position of women and the way they were treated in the movies, particularly in Bollywood. I would feel sad about the way they were portrayed.

I was very attached to my mother. She used to be full of wisdom. The kind of respect she commanded… when I write a woman’s character, I take her as a role model. It’s not that I give extra attention to women, it’s what they deserve.

You directed a Hindi movie ‘Maine Gandhi Ko Nahin Mara’ in 2005. What can you tell us about your new Hindi film, about the seventeenth-century Ahom general Lachit Borphukan?
I am in the middle of the project. It’s a historical subject. A lot of research needs to be done. I have been busy with the project for two-and-a-half years. It’s the first time a film is being made on this subject. I have completed the script and hope to shoot by 2023.

You are a politically conscious filmmaker. You voiced your concerns against the Citizenship Amendment Act. Recently, civilians were killed by security forces in Nagaland’s Mon district. Should the Army apologise?
I am not very politically aware about the things happening there, but as a citizen I must say that such things are very unfortunate. It will not be wise on my part to comment on the political aspect but as a humanist, any kind of killing is very painful. We need to seek an amicable solution through talks. It should not be through violence. I don’t approve of any kind of killings.

Filmmakers rarely speak against the government’s policies or the country’s socio-political situation anymore. What are your thoughts on the matter?
I think as a responsible citizen, and I don’t take sides. But in a democratic nation I respect democratically elected leaders, whether one likes it or not.

Making political comments is, of course, difficult nowadays. It’s a difficult situation for a creator. Today everything is judged politically, and that saddens me.

Filmmakers are politically conscious people. We have a very strong constitution. My comment was not against CAA, but was in favour of safeguarding Assamese identity. Because I am from Assam, I know there is a genuine problem, but I don’t take it as a religious way.