Now the slogan is, Internet first! 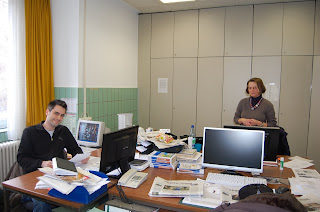 "I really do not know what it would be like after 10 years. It is very difficult to say whether this newspaper will survive or not…", says Katja Knoche, a reporter at Siegen Zeitung.

She says, "Now the slogan is, Internet first!"

Siegen Zeitung, 188 years old newspaper, published from Siegen, is quite popular in this region. Knoche has been associated with this newspaper for last 20 years.

Unprecedented changes have been taking place, in the last two decades, in the realm of global media. While there has been phenomenal growth of electronic media and online news worldwide, the future of print in the west is very much at stake.

Indian media, particularly Indian language newspapers, have been thriving and complementing growing news channels (there was only one state controlled news channel, Doordarshan, in 1991, however with the start of first private news channel in 1998, in 2010 there are more than 300 satellite channels which broadcast news in different languages in India) after liberalization and globalization of Indian economy. Newspaper industry in Germany is facing a serious competition from electronic media as television, radio and online news.

Knoche pointed out, ongoing economic crisis in Europe and dwindling readership is posing a major threat to Siegen Zeitung.

In 2006 Seigen Zeitung had a readership of 65 thousand people, in 2010 it has come down to 56 thousand. Besides Seigen Zeitung, two other daily newspapers get published from Siegen. Siegen, a medieval city, has one lakh and five thousand inhabitants.

Knoche says young people are not interested in buying and reading newspaper, moreover they read it online.

An obituary of a newspaper in the land of Gutenberg (Gutenberg was born in Mainz, Germany and is credited with using first printing press around 1456, and making the multiple copies of a text) sounds depressing but it seems interesting to map the trajectories of German media industry in this era of globalisation.

(Note: Writer is currently working on 'a comparative study of German and Indian media in the era of globalisation' under German Research Foundation fellowship at Siegen University, Germany. In the picture, Katja Knoche with her colleague jan Schafer in Siegen Zeitung office.)
Posted by Arvind Das at 2:58 AM

Dear Sir,
You are absolutely right. as observed in a couple of years internet might become the future slogan.